Probably a strange article, but as far as I know, very few information is available about this: some of our dear models are driven by... a driver. Those very same drivers who can't scream their terror when we make them go full throttle. Nevertheless, sometimes we paint them, sometimes we forget or don't dare to give them a face. Some of them do even have a name, others are emblematic of the vehicle their drive, and some don't exist but make us dream of who they could be.
Anyway, I'm sure that if mine were alive, they would open the window and vomit because of what I give them

The 43 first models all have a driver, even a co-driver for some of them. Further in the rest of Tamiya's production, they become rare: it is a shame for realism.
These drivers have different forms. Some have their upper body molded on a plastic plate (often to cover the inner chassis), others hang at the door or are screwed on their vehicle roof, and others have their body molded into their seat.

Hanging from the door (Monster Beetle) 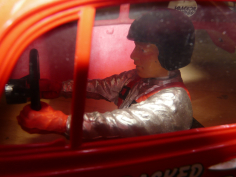 Screwed to the roof (Grasshopper II) 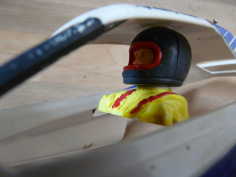 Screwed to a cockpit tube (Boomerang) 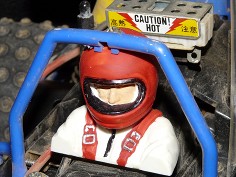 On the chassis plate (The Fox) 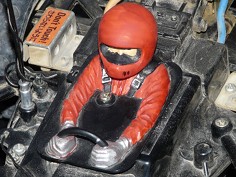 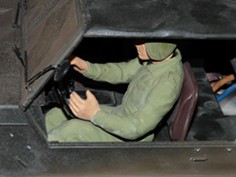 Screwed in the seat (Wild Willy) 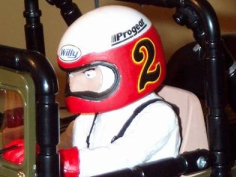 A Star among Stars 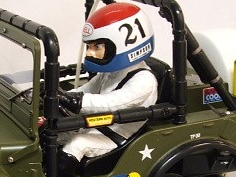 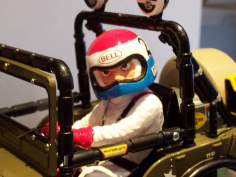 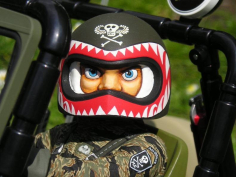 Drivers are more or less realistic, but all contribute to the model general aspect. They look the same and their shape finally depends on how they can be fixed into the vehicle. But there is one driver above them all, I'm talking about Wild Willy (1 and 2):the vehicle in itself is already quite special to drive, but its driver's mad look may even be more emblematic. Fans can paint them "state of the art" like the last presented.

Even better, some of these drivers have a name! I'm not talking about real car replica like Formula 1 or rally cars driven by famous people like Laffite, Loeb or Mäkinen. I'm talking about names invented by Tamiyato make the models more realistic.

Update may 18, 2011: unbelievable, these drivers are real since they talk! The proof is they were interviewed by BaraToZ. Interviewed drivers are marked with this clickable icon

that will directly send you to the interviews..

The first driver to have a name is Al Ernat,the Super Champ (58034) driver. The second one is Willy

On a side note, every re-released model keeps its driver, including its name whenever available. Also, Tamiya recently took great care of their Wild Willy character since it doesn't only drive a Jeep Willys or Honda City Turbo: it now drive several new "wheelie" models.

An interesting case is "Vibrant" Vannie: she is the Lunch Box (58063) driver,but no one has ever seen her... because she doesn't exist except with her name

This inspires the craziest dreams as she is the one and only woman driver in all Tamiya production. Except Michèle Mouton (58036 Audi Quattro Rally) who is a real woman who participated to the world rally championship back in the 80's.

Other vehicles mention a driver name, but nobody's on board. Here is the hall of fame of these famous unknowns no-one has ever seen:

You can notice some original names in these halls of fame: Hairy Ogre (Egress), Sammy Screwloose (Madcap, Stadium Thunder), Andy Antsinpants (Bear Hawk) or even Barf'n Berry ("vomiting Berry" for non-US readers). There are also families represented: the Evans

(Franck on the Grasshopper and his father Big Daddy on the Grasshopper II), the Volkson (Barry Jr on the Blitzer Beetle and his father mentioned on the Wild Dagger). Some drivers have several cars, even if they may not be physically on board in all their vehicles: Fabulous Frey (Astute, Baja Champ), Harry Hurryup (Super Sabre, Blazing Star), Rusty Rumpott (Mud Blaster, Juggernaut 1 & 2), Sammy Screwloose (Madcap, Stadium Thunder) and Barf'n Berry (Dyna Storm, Dyna Blaster, Madbull).

All other models do not have drivers: they just drive on their own

I want to mention here the members of the Vintage-RC forum who helped me a lot compiling these halls of fame: THANKS mates!