I had this project in my mind for quite a long time but I needed to get involved into it. In fact, the idea was born when I discovered that HPI had release a wonderful replica of a rally legend: the Lancia Stratos HF. However, this bodyshell is designed to fit the manufacturer's Cup Racer chassis, that is 4WD M-class chassis. I personally don't like this chassis my friend J-F gave me the chance to discover a while ago. Moreover, I don't like the idea not to respect the original RWD of this rally legend.

So I had everything to start another "special" project

Lancia Stratos HF: the bodyshell of a Rally Legend

Even if the chassis question is still to be answered, I can't resist to present the bodyshell that is the source of this project. Among their True Ten series, some bodyshells from HPI are highly detailed and reach very high quality standards. To be totally honest, they can proudly be compared toTamiya standards. I already had verified this statement with the Suzuki Escudo Pikes Peak bodyshell fitted on my TA-04 TRF chassis. Again, this Lancia Stratos HF demonstrates HPI's standards. The livery is the replica of the 1977 Monte-Carlo winner that was driven by Sandro Munari. 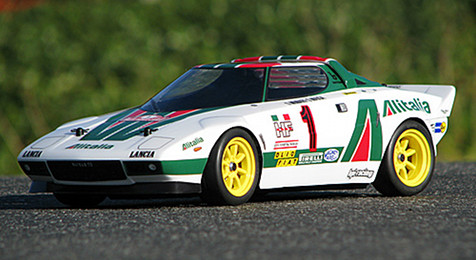 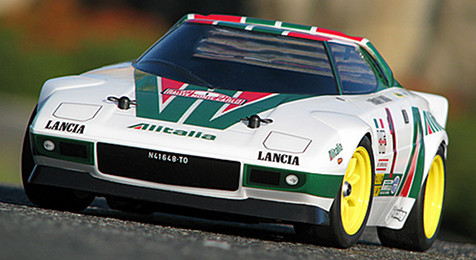 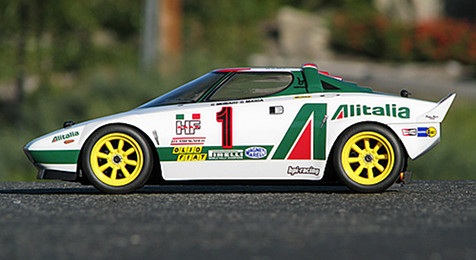 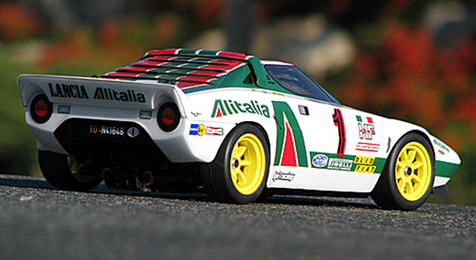 Now comparing with period photos of the real thing:

There are several differences, the most obvious being the lack of the front headlight ramp on HPI's version. The other main difference is on the wheel side: apart from their width at front and rear that is difficult to reproduce in RC, the rims are totally different. It is almost impossible to find star shaped M-size rims, especially with +3 offset at front and +6 at rear in order to perfectly fit the wheel arches. Tamiya barely providing information about their rims offset, I preferred to stick to HPI's. References are 3935 at front (+3mm offset) and 3940 at rear (+6mm offset), as HPI mentions it in their official descriptions of the bodyshell. Problem, theses rims only exist in black or white: they will require some painting (I gave the white references since they'll be easier to paint).

So, this is the "street" version of the Lancia Stratos HF, the winner of the 1977 Monte-Carlo rally. Last difference with the real car: the rocker panels below the doors. On the real car, they are twisted to reach the lower chassis while they are straight on the lexan replica. Unfortunately, this is due to the molding techniques and so far, only Tamiya was able to reproduce this on their Porsche 959 bodyshell, at the price of a legendary fragility. Between a very fragile bodyshell and cosmetic detail that doesn't dramatically affect the overall look, the choice was made.

Now that presentations are made, it is time to answer the question about the chassis that will receive the bodyshell of this mythical queen of rally in the 70's. Because the title announces an M-04 chassis while the bodyshell wheelbase is 210mm.

No doubt it would have been much easier to go for the HPI Cup Racer chassis for which this boyshell was designed, even at the price of converting it into RWD. Well. No way. I preferred to find an alternative solution.

Because the bodyshell is in the M-chassis format with a 210mm wheelbase, I checked for possible candidates in Tamiya's offering: 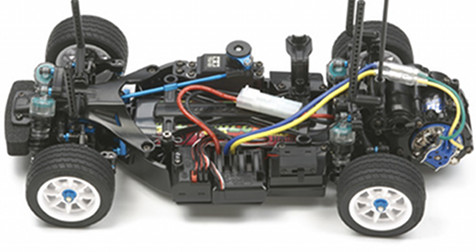 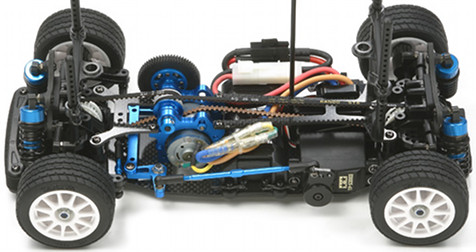 I decided to forget the M-06 and TA-05 M-Four chassis. So, I was left with the M-02 and M-04, each one causing other problems: I already have the first one under my Toyota Celica LB Turbo Gr.5 bodyshell. For the second remaining candidate, it doesn't exist with a 210mm wheelbase: that is annoying

. Since I can't make the bodyshell longer, would it be possible to reduce the M-04 chassis wheelbase even if Tamiya never did it?

The M-04 chassis in Tamiya's catalog

It's not easy to explain why so few models which is probably the sign of much lower sales than its cousin the M-03. Nevertheless we can think of these reasons:

From these reasons, the most serious is probably the more delicate handling. This is quite surprising though since the opposite situation occurred with the first M-chassis generation: Tamiya released more models with the M-02 chassis than with the M-01. But it is also true that the first chassis generation could easily swap from front to rear wheel drive by inverting the front and rear gearboxes...