Tamiya Incorporated is a Japanese manufacturer of static models, radio controlled vehicles, educational models powered by batteries and solar energy, paints, tools and other supplies for modeling. The company was founded in Japan in 1946 by Yoshio Tamiya but only entered the model world in 1948 with the production of a wooden ship model.

Tamiya's slogan is "First in Quality Around the World", originating in an outstanding moulding quality and accurate parts fitting close to perfection. This precision combined to a high scale detail standard make Tamiya's quality famous among hobbyists around the world.
The two star logo can be found on every Tamiya product. The red color stands for passion and the blue color for precision.

Speaking of Tamiya without mentioning the static models would skip most of the manufacturer's history: this activity is its core business and the basis of its worldwide renown. But if Tamiya's first radio-controlled models were advertised as "suitable for remote control" and considered as "models in motion", there is a good reason. At Tamiya's, RC modelling was born thanks to static modelling and this heritage is still alive in their current production.

On december 4th 1976, Tamiya entered the RC world by releasing the kit RA1201 Porsche Turbo RSR Type 934 at the price of 9.800 Yens (about 90 of our today's euros, a little fortune by the time). Especially since adding the radio equipment would raise the amount up to more than 17.000 Yens.

A few months before, Tamiya had massively invested in order to release the static model of this Porsche 934 in their 1/12 "Big Scale" series: they even bought and dismantled a real-size Porsche 911 to repoduce it with better accuracy (the 911 is the street version of the 934 racer). The static model reached an unseen realism and quality level by the time, but sales quantities remained too low to recoup the mold astronomical cost (tens of millions Yens). A solution was required. 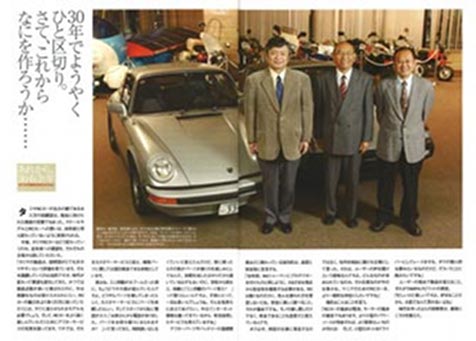 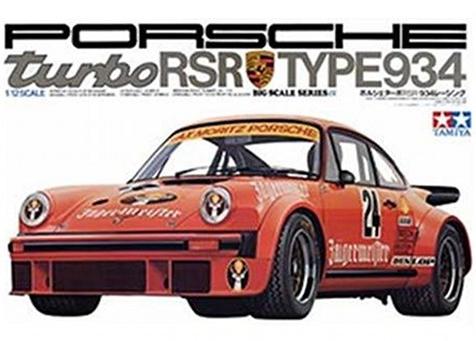 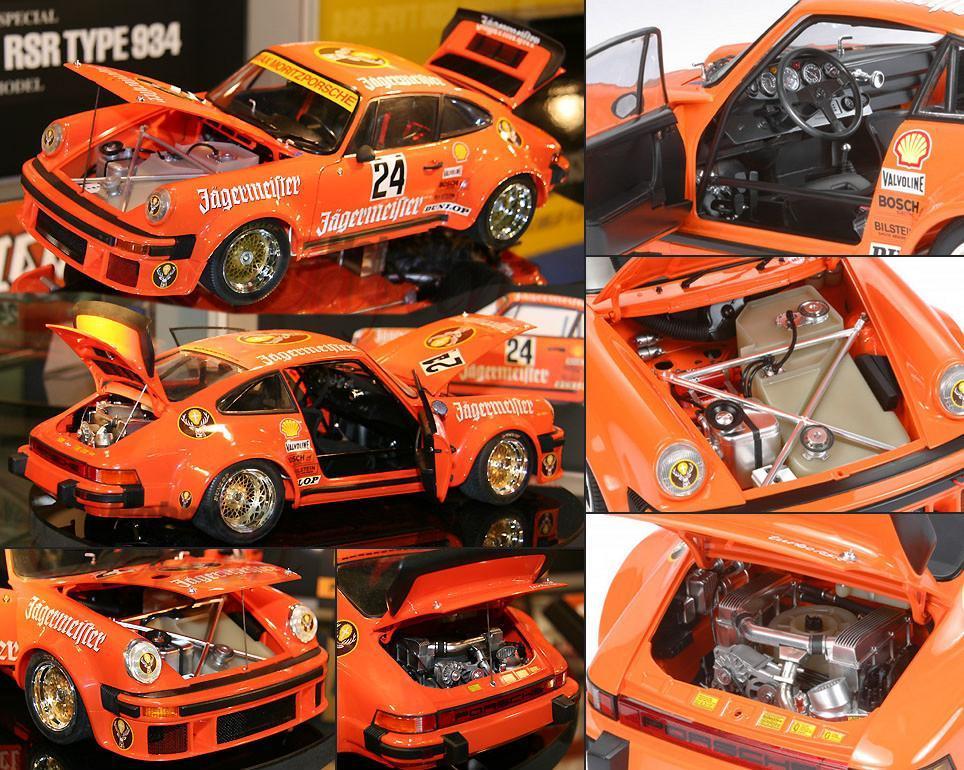 One day, Shunsaku Tamiya (Tamiya's President) saw one of the company designer playing with a radio-controlled car on the compagny's car park. This designer, Fumito Taki, loved anything radio-controlled and often used the company's car park at spare time to fly his gas-powered planes. Fumito Taki had already been in charge of transforming one of Tamiya's static model into an electric-powered model: the model was the 1/16th scale M4 Sherman tank released in 1974. Here are some documents about it, some period ones and more recent ones:

That day, Fumito Taki was driving a car but Mr Tamiya was surprised not to hear the usual sound of the engine, so he asked for a closer look to this custom made model. Suprise: the body was an 1/12th scale Formula 1 static model from the Big Scale series and the chassis featured an electric motor powered by dry cells. Right away, Mr Tamiya knew he got the idea. 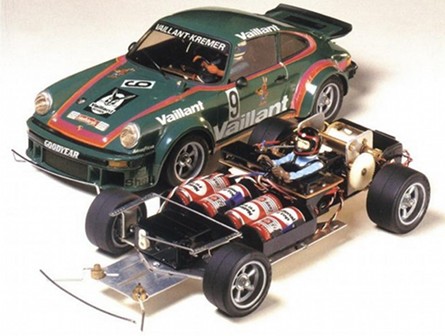 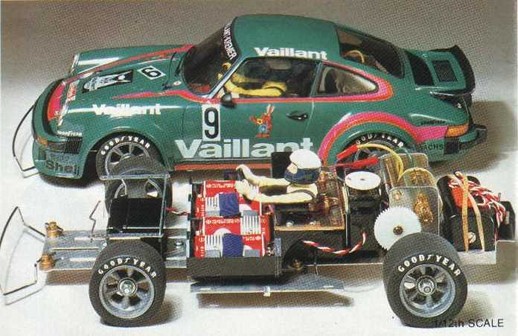 The key for success was quite simple: it was the first electric-power radio-controlled model when other products at the time were either detailled static models or gas-powered radio-controlled vehicles on which the body was mainly meant as a chassis protection.

Thanks to Fumito Taki's passion and ingenuity, Tamiya entered the electric-powered RC car world by releasing an innovative concept: the static model in motion. This model heritage is still alive in Tamiya's current production and it is a leading aspect of its success.

Mr Fumito Taki is a very important man in Tamiya history since he personally designed many static models, but also most of the brand's first RC models. This interview he gave to the Radio Control Car Racer magazine was published in september 2008 demonstrates his key role at Tamiya:

The last 40 years of radio-controlled modeling history would certainly not be the same wihtout Tamiya's "three musketeers". This website wouldn't exist too 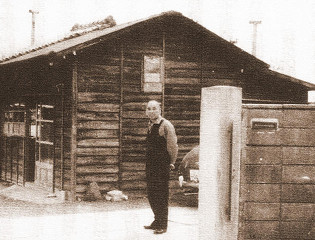 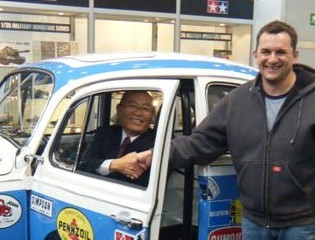 At the 2010 Nuremberg fair with Walter's real-size Sand Scorcher

This is the end of this Tamiya "historical" presentation that was inspired from Shunsaku Tamiya's book Master modeler Creating the Tamiya style. I want to thank the person at Tamiya Japan who helped me in my researches, my friend Otax for many searches and translations of japanese content, and Paul from Tamiya Treasure in my searches for photos.

The two books above present the Tamiya company and explain many interesting aspects about our favorite models design and production (thank you TamOR). Thanks to Rob from RC Toy Memories, a video completes these documents.