Despite the unrealistic 4WD transmission, I have always been curious about the F201 chassis mechanical challenge. Even if it was not on my "top priorities" list, I found an opportunity matching my requests in terms of condition and budget. A few clicks later, this Ferrari F2001 was joining my collection.

The F201 chassis lineage was born in 2002 and ended the following year: as it seems, the 4WD Formula One concept was not successful. 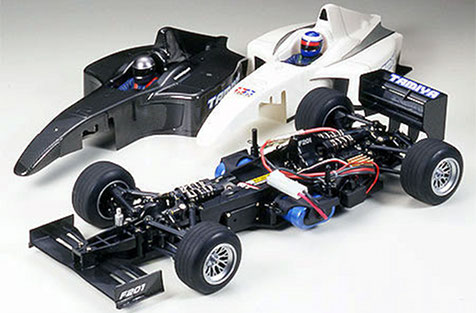 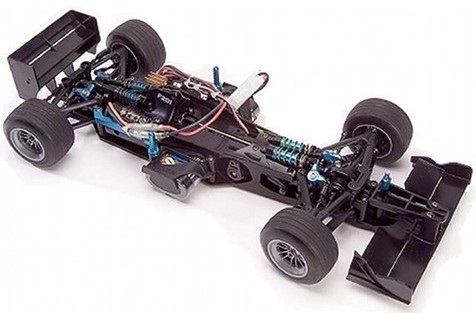 In stock form, Tamiya supplied the chassis with a rich equipment: ball differentials, hydraulic dampers, Sport Tuned motor, adjustable turnbuckles and a complete set of ball bearings. In addition, the 58294 kit was supplied with 2 bodyshells among which a beautiful carbon patterned whereas the limited 49336 edition was supplied with many option parts (including the carbon patterned bodyshell too).

Despite the asset list, the F201 chassis career was short:

Of course, a 4WD Formula 1 chassis can be a shocking idea. Some time ago, I read a very interesting review written by Mr David Jun on Tamiya USA and this is what made me consider this model as a nice potential addition to my collection. For those of you who wouldn't know who the man is, he is the 1st driver to have ever won an official ROAR race (ie USA-Canada championship) with a TA-03F Pro back in 1997... overtaking other manufacturers professional drivers. Tamiya would celebrate this victory releasing a special kit, the 58200 TA-03F Pro David Jun Edition.

So, when this man gives his opinion about the F201 chassis, the least you can do is pay attention.

After reading the complete review, re-reading and re-re-reading it over and over, some questions raised: could it be that the F201 wouldn't be a casting mistake from Tamiya? I am not ashamed to admit I was part of those wondering why Tamiya had such a silly idea of making a 4WD Formula 1. Especially when the official rules would turn the model into a parking lot runner... But what if Tamiya never intended the F201 to be the successor of the F103, in particular for racing? After all, its name is F201, not F104: may be there is a reason for that. So what if the F201 was another design exercise from Tamiya engineers? Think about the Porsche 959 for example...

My Ferrari F2001 when it arrived

Here's the model as I found it after opening the parcel: 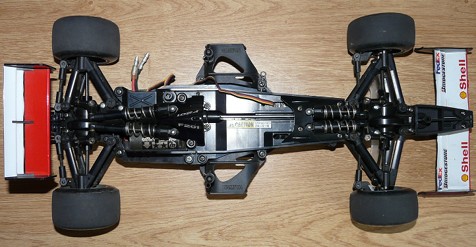 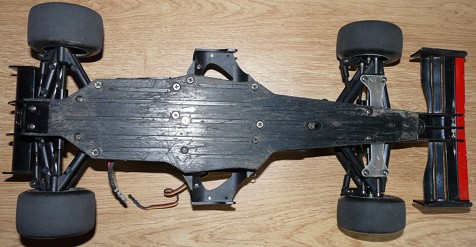 At first sight, no specific problem that I wasn't aware of thanks to the seller's precise description: the model was driven as you can tell by the scratches under the chassis and the tire use. The bodyshell is in good condition overall, despite a break next to the driver the seller described (not visible on these photos, and I think it won't be too difficult to hide).

Immediately, I felt like an urge to entirely disassemble this model. Not that I had spotted irritating assembly mistakes, not even because I am a maniac, but because I instantly liked the chassis architecture. This is difficult to explain: this is the first time a model does this to me since my XR311. These two photos may show you why: 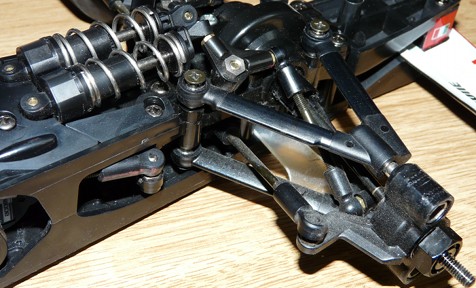 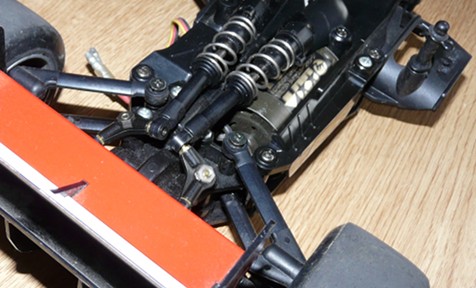 . So great: bellcranks, differentials and tie rods, many tie rods, all this carefully fitted into a incredibly compact block.

Despite bursting with impatience, I wisely waited to receive a few extra parts before disassembling. Facing this compact block, I made no effort to understand how it worked: I conscientiously unscrewed everything I saw, layer after layer. 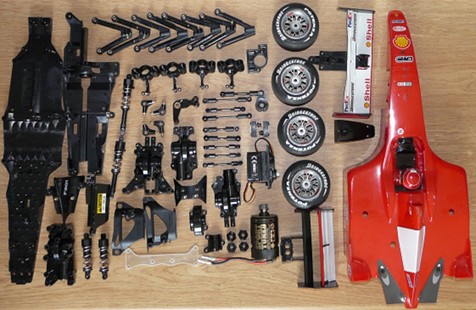 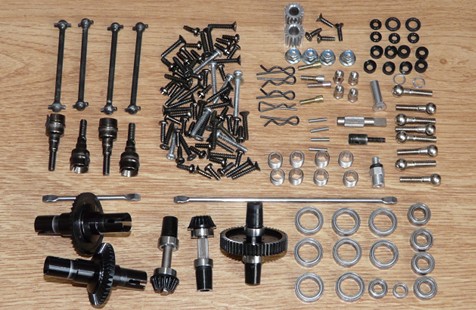 Two hours and a half disassembling

: yes, I confess I spent a few moments thinking how to put some parts apart since they were still hold by screw I hadn't spotted yet. I also confess I didn't read the manual to reverse all the assembling steps (that would have been smart though). Nevertheless: 2h30! About twice the time it takes me to entirely rebuild my M-03 the few times I give it a complete maintenance (which is less than once a year

I was expecting this, and this is why I got: the F201 is very complex. Despite the fact I disassembled it without paying much attention to the design, I spotted some very promising parts. The built will be epic